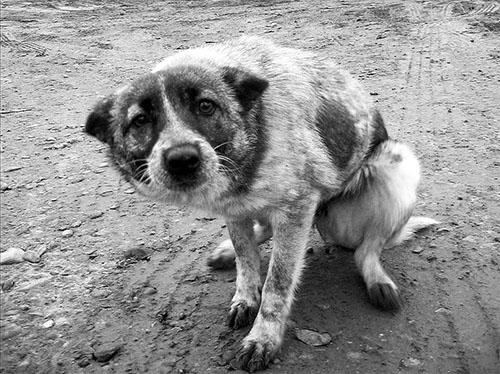 If people were stray animals, wandering alone and hungry, how long would one range before her protruding ribs and sunken eyes betrayed her as rejected, unwanted, alone? How long would she dart in and out of traffic, looking for water or rest before some kindly motorist stopped, called out, and tried to entice her to safety with some morsel of food?

If people were dogs and cats, and you were to see one eating from a trash can, or skulking into the crawl space under your house, would you feed him? Would you try? Would you?

You think you would. You say you would. Yet you pass by daily. You avert your gaze from the halt step, the shriveled limb protectively hidden, the fear in the eyes.

At Second Chance Animal Sanctuary, volunteers visit the animals daily. They walk the dogs. They play with the kittens and name them. They freshen the water, play tug-o’-war with the puppies. They fill index cards with descriptions that prospective adopters read:

REX is playful and outgoing. He is good with children and other animals. Best suited for a family.

CHLOE was feral but rescued along with her kittens and brought here. She needs a subdued environment. A single owner, child-free household would be best for her.

RUFUS is a mature pit bull-lab mix who enjoys a romp in the yard and a good scratch behind the ears. He’s extremely patient and even-tempered and would adapt well to households with older children, or perhaps an older couple.

If people were stray animals, we would all be worth rescuing. Groups of rescuers would band together, forming networks whose only purpose is to give care and comfort to the abandoned. We would form 501(c)(3) organizations for the rescue, feeding, and care of the lost.

ALICE was married 48 years and her husband died. She raised eight children and was Red Cross volunteer for 25 years. She enjoys reading Emily Dickinson, takes a walk every evening, and is a fan of Gunsmoke. She needs a gentle friend, preferably a single person with a wry sense of humor, who shares some of her interests and can drive.

TREVOR never knew his father. His mother’s drug habit rendered them homeless. Trevor dropped out of school and went to work to support himself and his mother’s habit. He needs a strong male friend who tolerates (and even uses) coarse language, and can teach him a trade.

TAYLOR is transgender. Her family rejected her and she hasn’t seen them in four years. Taylor is startled each morning when she has to shave her beard stubble. Lacking the means to use hormones, she makes do with what she has, but feels a sense of disconnection from herself and everyone around her. She needs hormone treatment and a group of understanding, loyal friends who will stick with her.

If Lost People were Stray Animals

If lost grownups were stray animals or abandoned children, we’d understand. We’d know right away what was needed. We would approach with all gentleness the person whose way of life and way of being had been shattered. Moved by pity, we would patiently entice the starving-hearted with choice morsels. We would keep our distance but watch daily for the slightest sign that the traumatized were able to trust again. Small victories would be worthy of celebration. “She approached me in public today,” your status update would say, “She hesitated before declining my invitation to dinner at my home. I can tell she’s starting to rely on our weekly coffees at Starbucks. Some day she’ll be able to trust me enough to accept that dinner invitation.”

How lovely, if each traumatized person were valued as much as a stray animal. How the abandoned and unwanted must long to be loved when they cannot love themselves. How they must long to have someone whose first act of love is to see, the next to listen. To be noticed is to have value; to be worthy of patient outreach and rescue is to be given hope. What if teams of volunteers sought out the shattered sufferers, removing them from their cages, taming them, showing them love?

If you could see her abandonment, his feral wildness—how they snarl at the traps that snapped them in two and have them bound—you would see that they may die from it. You would see that one person in her life would make a difference, two would be able to bear his litter to the place where angels stir the healing waters, and three would be wise men bearing healing salves and the most subtle spices to return flavor and beauty to her life.

I wish you could look past our bared teeth and growls with eyes of faith, love, and unreasoning hope, envisioning what might happen if we were fed, and gentled, and loved day by day until we could relax, even play again.  I wish you would see that every animal deserves a second chance.