“Malefic Saturn rejoices in the baleful 12th House, which supports its theme of limitation.” — William Lilly

“The Dark Arts are many, varied, ever-changing, and eternal. Fighting them is like fighting a many-headed monster, which, each time a neck is severed, sprouts a head even fiercer and cleverer than before. You are fighting that which is unfixed, mutating, indestructible. Your defences must therefore be as flexible and inventive as the Arts you seek to undo.” — Severus Snape, in Harry Potter and the Half-Blood Prince 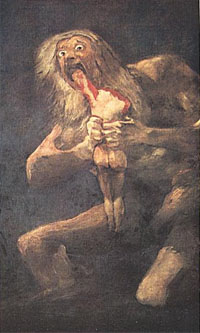 Saturn in Mythology. Apart from being a real planet with theoretical influences or energies, Saturn is also symbolic of certain types of psychological and  spiritual energy. Mythology can help us to understand something about the nature of this energy; so let us turn for a moment to Bullfinch’s Mythology and have a look at the mythological Saturn. Saturn, or Chronos, was the Roman god of agriculture and the harvest. He was the god of time, as evidenced by his name, chronos, from the Greek word for “time.”

The son of the heavens (Uranus) and the earth (Gaia), Saturn usurped his father’s power after first castrating him. Since everyone (particularly the god of agriculture) reaps what he sows, it was prophesied that Saturn would, in turn, be overthrown by one of his own offspring. To avoid that little problem, Saturn ate each of his children as they were born. Goya’s painting of Saturn eating his son aptly portrays aturn’s dark side.

Desperate to help one child survive to adulthood, Saturn’s wife tricked him after the birth of their last child by wrapping a stone in a blanket and offering Saturn this substitute baby. The real baby, Jupiter, she hid away. Once grown, Jupiter, the god of expansion and blessing, did just as it had been prophesied, and overthrew his father, Saturn. At his worst, we see that Saturn symbolizes insanity, murder, destruction, and pogroms. Some of history’s infamous murderers with the planet Saturn resident in their 12th House include the “Son of Sam” killer, David Berkowitz, mass murderer Ted Bundy, O. J. Simpson, and Lyle Menendez. On the bright side, George Washington, Margaret Thatcher, Robert Redford, and Steve Martin also have 12th House Saturns. 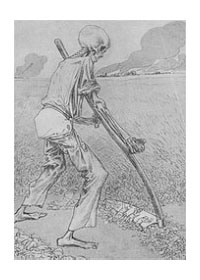 The Symbols of Saturn. Saturn also symbolizes the habitual actions or thoughts that undermine us, making it a planet of self-sabotage and undoing. However, Saturn’s modern astrological symbol resembles a throne of sorts, perhaps the throne of a heavenly father. A heavenly father may restrict before he can give expansion; he will prune the tree so that it bears more fruit. Saturn is also, therefore, a benefactor and one who brings blessing and abundance… eventually. Thanks to the association of Saturn with the harvest, sometimes Saturn has been depicted as an elderly man bearing a sickle–which explains why, at his worst, Saturn also might resemble the Grim Reaper.

The work of Saturn seems to be the energy or power of undoing, death, and rebirth, which reminds me of the words of Jesus:

Very truly, I tell you, unless a grain of wheat falls into the earth and dies, it remains alone, by itself; but if it dies, it bears much fruit. Those who love their life must lose it, and those who hate their life in this world will keep it unto eternal life (John 12)

One might think of Saturn’s energy as manifested by the proverb, “Whatever doesn’t kill you will make you stronger.”

I like the way that psychoanalyst and author James Hillman writes about the influence of Saturn (limitations) in his life:

As I’ve grown older, I’ve come to realize that the curses, the frustrations, and the character faults visited on me by Saturn mean something completely different than what I thought when I was younger. I took them literally as curses, and I cursed my stars for not giving me what I believed I needed and wanted. That is, I cursed Saturn, to use the old language.

But it isn’t Saturn who curses us; we curse him. We make him into that poor, shunned, limping old God because we don’t understand his mode of blessing. What a curse it must be to keep giving gifts that are received as punishments! The faults and frustrations he visits on us are his way of keeping us true to our particular image. No way out.

The old lore attributed the last years of life to Saturn. That makes sense. Only now can I begin to reconcile myself with and not rebel against what I am and what I am not (69).

Hillman, James and Michael Ventura. We’ve Had a Hundred Years of Psychotherapy and the World’s Getting Worse. San Francisco: HarperCollins, 1993.