I stumbled across a fascinating video at The First Morning, and thought it fitting for inclusion in a blog about goddesses and their modern-day counterparts, beautiful babes.  The video, like the babes, is stunning.

That so many of these movie stars look so much alike makes one wonder if the standard for feminine beauty has changed  much over the years.  Take, for instance, Devi, the archetypal representation of all Hindu goddesses. Also known as Prakriti or Maya, she complements the male aspect of the divine; a depth psychologist can’t help but think of the anima and animus.

Surprisingly, the goddess figure is an aspect of the Mother Archetype. It seems, at first blush, a ludicrous idea to connect the movie stars of the YouTube video, or the image of Devi, with mothers. But any mother whose five-year-old son has just proposed marriage to her knows: Mom is a goddess.

Jung wrote that the mother archetype appears in numerous aspects. The most important are one’s own mother and grandmother, stepmother, and mother-in-law, followed by any woman with whom a relationship exists. Figurative mothers include the goddess, the Mother of God, the Virgin, and Sophia. In The Archetypes and the Collective Unconscious (Princeton University Press, 1969), Jung wrote that, “Other symbols of the mother in a figurative sense appear in things representing the goal of our longing for redemption, such as Paradise, the Kingdom of God, the Heavenly Jerusalem…the Church, university, city or country, heaven, earth, the woods, the sea or any still waters, even the underworld and the moon, can be mother-symbols” (p. 81).

The mother archetype may be expressed through things or places representing fertility and fruitfulness: the cornucopia, a ploughed field, a garden; a cave, a tree, a spring, a deep well, the baptismal font; to vessel-shaped flowers such as the rose, or the lotus; hollow objects such as ovens and cooking vessels; and helpful animals such as the cow or the hare (ibid.).

Of course, every force has an equal and opposite force, and mothers are no exception. For every good mother and healing pot of chicken noodle soup, there is an evil mother–such as Kali, who devours her young. I’ll write more about evil stepmothers, witches, and mothers who eat their young another time, because they are just as compelling and interesting as the wonderful, Norman Rockwell type mothers we cherish in our hearts (whether our personal mothers fit that bill or not). 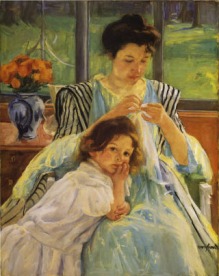 One of Jung’s most interesting ideas about the Mother Archetype was that the personal mother had far less power over her children than did the archetypes projected upon her by the children. In other words, the effects of one’s mother can be divided into actual effects produced by the mother through her character, attitudes, and actions, and those effects produced by the child(ren) and projected onto the mother as if they were real.  I like this theory, because everyone in the relationship gets to share some responsibility for the effects of the relationship. Jung quite reasonably looked for to the parents for causes of pathology in children, and afterward to the child’s own temperament and ability (or failure) to adjust to the circumstances of of family life.

The importance of the goddess and the divine Mother Archetype cannot be over-emphasized. I think that Jung himself wrote quite beautifully about the positive aspects of the idea of Mother-love:

. . . the mother-love which is one of the most moving and unforgettable memories of our lives, the mysterious root of all growth and change; the love that means homecoming, shelter, and the long silence from which everything begins and in which everything ends. Intimately known and yet strange like Nature, lovingly tender and yet cruel like fate, joyous and untiring giver of life–mater dolorosa and mute implacable portal that closes upon the dead (Archetypes 92).